Looking back in time: does the past encourage a Community of Practice model for the world of Interpreting?

But let's take a leap back in time and explore who interpreters were in Antiquity.

Interpreters were found where there was a need to solve or avoid conflicts, negotiate business or public relations or indeed, in courts where 'foreigners' were tried. As such their status varied.
The Greeks considered interpreters as semi gods; they used the words 'translator' or 'interpreter' indifferently which meant 'a human being who performs one of this god's numerous activities (including linguistic ones)', Hermann (1956, 2002). I wonder what the other 'non linguistic activities' covered... If you ask an interpreter working in the health and social fields today, I am sure they will have some suggestions to make. Thinking about it,  I am sure they have not felt like semi gods for a while.

The Greeks thought their language was superior and that other languages were barbarian. As such they had to depend on interpreters whereas the Romans who spoke at least two languages felt more at ease conducting their business in the language required. It looks as if the Romans had already understood the advantages of multilingualism even though they often complained the interpreters used by the Greeks were often overzealous and negotiated in favour of their client. They had not yet thought of the Code of Conduct, or at least, there is no trace of it.

Still we can see that interpreters were selected, chosen for certain duties but they hardly came together as a profession. They were valued but also criticised. They were to be found in the highest sphere of power.

Was this always the case?

Hermann (1956) reports that in AD 400, the Chancellery of the Interior Ministry recorded interpreters required for the barbaric languages spoken by the non-classical peoples; there were 130 interpreters in the region of Pontus where 300 languages were spoken. We can imagine the needs for interpreters in administration, health, justice, education and politics.  It looks as if  we have finally found some traces of public service interpreters, also called community interpreters. At the time, invasions were the main force behind cultural and linguistic melting pots.

Could we imagine that these interpreters met as professionals, discussed and exchanged views about their profession or even created opportunities to enhance their career as we try to do today, or as a Community of Practice would try to do? Were they simply considered civil servants and as such carried on their daily tasks like anyone else?  Difficult to say.

If we transpose what happened in antiquity to present times, we can recognise some similarities.
Conference Interpreters are found in political spheres such as the European Institutions or the United Nations. They are unique and rare for their qualities and level of expertise. World leaders and CEOs try to speak different languages but tend to travel with their own trusted interpreters for key negotiations.
On the other hand, public service interpreters or community interpreters still help 'normal' people communicate for administrative purposes when  in different countries. It is a fact that a search for a better life, a safe life, or simply a holiday or a professional trip tend to be the reasons why people travel today as opposed to the invasions of the past.

Networks and partnerships have been created in all interpreting fields. The European Master's for Conference Interpreting (EMCI) is a very good example. Not to mention the professional organisations, such as the Association Internationale des Interprètes de Conférence (AIIC), the Institute of Translation and Interpreting (ITI), the Chartered Institute of Linguists (CIOL), Critical Link International, to name a few but the list could go on for ever.

In my next post, I shall explore what a Community of Practice is as currently defined by Etienne Wenger.

Looking forward to your comments.

Disclaimer: The views expressed here are the author’s own and should not be taken to represent the official positions of universities, networks or associations.

Popular posts from this blog 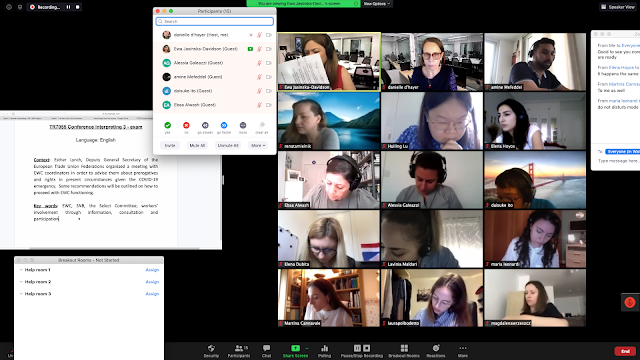 COVID19 brought its own online teaching challenges. But that was the easy part. Wait until you hear about the summative assessment challenges! Here is how we did it. That could perhaps help you with your own online final exam approach. Traditionally, assessing conference interpreting is done in so many ways, but always face to face. Some universities assess their students as they interpret live speeches whilst others prefer their students to use recorded speeches. Some universities organise a final panel to assess candidates, others assess recorded exams. This post is not about the format of interpreting exams, but rather about the approach to online exams at a time of crisis. At London Metropolitan University, the format of our interpreting exams is as follows: each module is individually assessed. It could combine one or more of the following formats: practical interpreting exams (consecutive and simultaneous), presentations, essays, and portfolios of practice.  I would like to focus
Read more

Rising to the challenge with pride: a community of practice at work 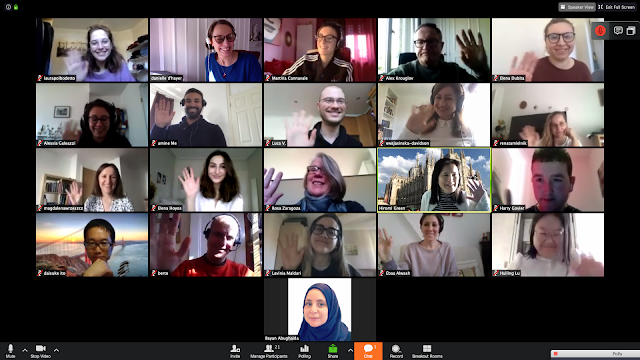 For our interpreting students on the MA Conference Interpreting at  London Metropolitan University it is our second week of online teaching. We actually went online even before the University suggested we should. This was a collaborative decision made with students and staff together during a Zoom consultation meeting. Our students come from many countries including Italy, Spain, China and Japan where their families were already in quarantine or isolation. They were worried and did not feel comfortable to travel to University. We then collectively decided that teaching would adapt to integrate the students' concerns. MA Conference Interpreting students and tutors closing a mock conference online. We are proud to say that we have not missed a single class since the Coronavirus crisis.  From our mock conferences, to language specific interpreting tutorials, workshops and interpreting practice, we have delivered all our classes.  We, the tutors and students have been
Read more

The future of teaching and learning is in our hands

(Photo:  tinyurl.com/fvop5buq) When I’ll look back at life under COVID-19 in a few years time, I will remember two contrasting experiences. On the one hand, a life on “pause” with restrictions of all kinds that all started in the same way: “you cannot…”. And on the other hand, the “fast forward” experience in teaching and learning that required imagination, agility, resilience and a deep sense of care. With access to vaccination, “life after COVID” is in sight. What will teaching and learning look and feel like? Will we fall back into our old habits and take refuge in the traditional face to face interaction? Will we celebrate the flexibility of online learning? Will we take shortcuts and do a bit of both to “make everyone happy”? To tell you the truth, when I speak to colleagues and students, we all share a common experience at present: we are exhausted, trying to survive one day at a time! However, I feel teachers have never felt so committed to delivering the best possible experienc
Read more